Jalapeno peppers, Poblano peppers, Habanero peppers, Pasilla peppers – there are so many to wonderful chili peppers available. Learn more about them here.

Learn just how hot these peppers are and where they are used in Mexican and Tex-Mex dishes.

The Rio Grande Valley grocery stores present a colorful array of chili peppers. Many Winter Texans come from areas where a sprinkle of black pepper means that the food will be ‘kinda spicy’. When they arrive in the Rio Grande Valley they wonder “What’s hot, and what’s not?” After reading this primer we hope you have at least a beginning understanding of chili peppers; where they are used, and how hot they are.

How hot is a pepper?

In 1912 a pharmacist named Wilbur Scoville, working for Parke-Davis, devised a ‘heat scale’ for the taste of chili peppers. This Scoville scale is now used to estimate just how ‘hot’ a chili pepper is. The baseline for peppers is the green, or bell, pepper which has a Scoville rating of zero – no heat. The hottest pepper known is the “Carolina Reaper” – with a Scoville Rating of between 1.6 and 2.2 million Scoville Units. Why???

What makes a pepper hot?

Chili peppers, members of the plant genus Capsicum, contain a compound called Capsaicin, an irritant to humans and other mammals. It is an active ingredient in pepper spray, and it gives chili peppers their heat. A Warning – Capsaicin really is an irritant – especially to mucous membranes like the eyes and nose. When handling peppers I like to wear rubber gloves and am careful to not rub my eyes!

Common chili peppers in the Rio Grande Valley and how hot are they?

Here is a general rule – the smaller the pepper the hotter they are! This is not always true because growing conditions, water content, and individual plant differences make an exact measurement impossible. Also, the webbing and seeds inside the pepper are generally hotter that the body of the pepper.

How hot are the peppers we see in the store? 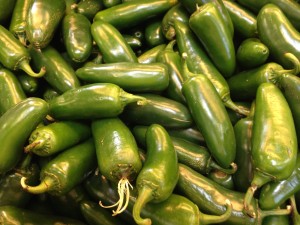 What about the dried or smoked chili peppers we see?

There are several commonly available dried chili peppers available in the RGV.

The chili Ancho – or dried Poblano pepper – is the sweetest dried chili, and is used mainly in tamales and red chili.
There is also the Guajillo Pepper – mild to hot and used for tamale sauces, pastes, and rubs.
We recently began using dried Pasilla peppers – also known as the Negro pepper. This large pepper is the main seasoning in tortilla soup, and has a wonderful aroma and mild heat.
A smoked and dried Jalapeno pepper is known as a Chipotle Pepper. It is available packaged, but usually canned in Adobo sauce.
Pequin peppers are quite hot and can be substituted for cayenne pepper.

What’s next? Use your new understanding of peppers to create a great Fresh Pico de Gallo, or Salsa Mexicana Recipe.